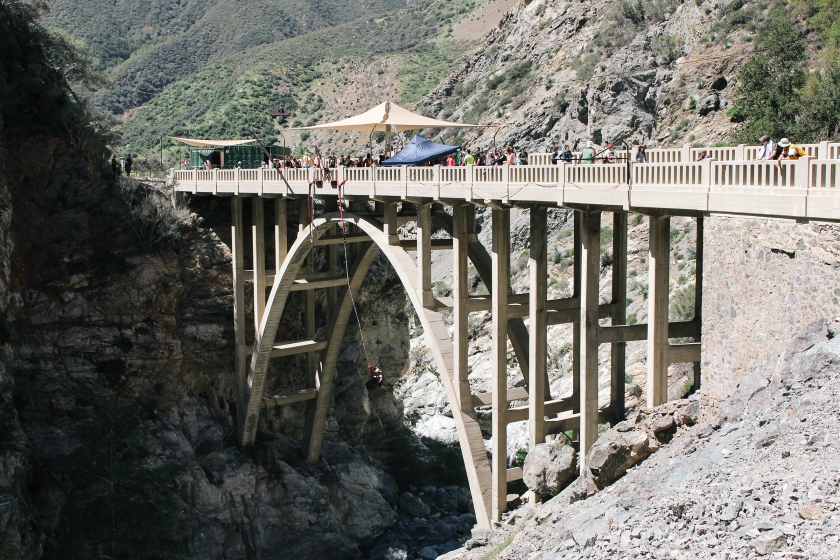 Last year we both skydived 13,000 feet in the air and ever since then, there has always been a thirst for more adventures. Bungee jumping was the next thing on our list.

Bungee Jumping At The Bridge To Nowhere

For months, we subscribed to Groupon in the hopes of snagging a good bungee jumping deal. Then one day, Mother Nature answered our prayers. Vivian stumbled upon a deal to jump off The Bridge to Nowhere for $60. Usually, one jump would cost a hefty $100, but with the deal for $80 and an extra special 25% off, it totaled a sweet $60. The jump also comes with a complimentary shirt. If a free shirt doesn’t get you, we don’t know what will.

The Bridge to Nowhere is the only bungee jumping destination in Southern California. It’s headed by Bungee America, a group of certified experts who have been bungee jumping off the bridge since 1989. After some research, we signed up for the Groupon deal, got the code, and bought our tickets. Things got real!

The day started early. We met our bungee group of (about) 80 at 7:30 in the morning. Not a morning bird? You’re going to have to be that day. Make sure to come 15-30 minutes beforehand to sign in and have the Bungee Team weigh you too. Once you’re set, they’ll hand you a wristband with a number indicating which weight bungee jumping group you will be a part of (light, mid-heavy, and heavy). You don’t have to worry about that until you get to the bridge.

After everyone signs in, you’re given a quick pep talk, some rules and regulations, and the most important information, “how not to get lost on the trail.” In short, the trail that leads up to the bridge is unmarked, but if you follow the river up, you’ll reach the end of the hike. Follow the river down, you’ll make it back to the parking lot. Sounds easy enough. Don’t fret if you still get lost on the way down. We did. Just keep to the river. You’ll make it out alive eventually.

The trail is a 10-mile hike round trip. Nothing too strenuous. You will, however, be crossing the river 6-7 times ranging from ankle length to knee deep so bring along a pair of shorts and extra socks.

Once we got to the bridge, we had an hour to eat our lunches. It’s super important to eat something filling during this time. You’re more likely to throw up your nerves on an empty stomach than you are on a full stomach. There’s a quick training session on how to put on your ropes and harness, how to jump, and different ways you can jump. Once the talk was done, we were ready to go!

I had a lot of fun! It was definitely a very exhilarating experience. On the ride up the mountain, I freaked out because I was so nervous and almost mentally chickened out. A lot of people told me bungee jumping was a lot scarier than skydiving because you’re so close to the ground and I came into this with that mental thought. But when I stood on the edge of the bridge and counted down with the jumpmaster, I felt weirdly okay. In the end, I got more of an adrenaline rush from skydiving than I did bungee jumping. The jump was quick. It wasn’t too high. And the free-falling was cool. For me, the scariest thing was the “bouncing up and down” after the jump. That was when it hit me, “Oh shoot, I’m hanging 121 feet in the air with nothing on but a couple of ropes.” I was more nervous as I watched people jump than when I did it myself. Overall, I’m down to do this again but next time, I want to go higher!

Tip: When you’re standing at the edge and you count down DO NOT concentrate on the fact that you’re about to jump off a bridge. You’re going to psych yourself out. Be like Nike and just do it.

This was by far the most thrilling and adrenaline rushing experience I’ve ever had. Unlike Jennifer, I had more of an adrenaline rush from bungee jumping than I did skydiving. I was super excited as the jumpmasters began to suit me up. I felt so ready. I felt like I could easily conquer it. That was until I was on the edge of the bridge and looked down–bad idea. I psyched myself out and held onto the bridge for dear life. The jumpmaster tried to calm my nerves, but that didn’t help–especially when he started to count down. Not wanting to be that person who gets scared and doesn’t jump after the countdown, I mustered up my courage and jumped as far as I could. I started screaming even before I jumped. The audience definitely got a laugh out of that. From the jump, to the rebound, and to everything else, it was all an experience that I will never forget. Hands down, I would do this again, but I want to go even higher next time!

Tip: You will be extremely exhausted by the end of the day from both the hike and from the jump. Do yourself a favor and go straight to the shower and not to your couch/bed or you will not get up.

Want to see a video of Vivian bungee jumping and screaming her head off? Head over to our Instagram for a good laugh.