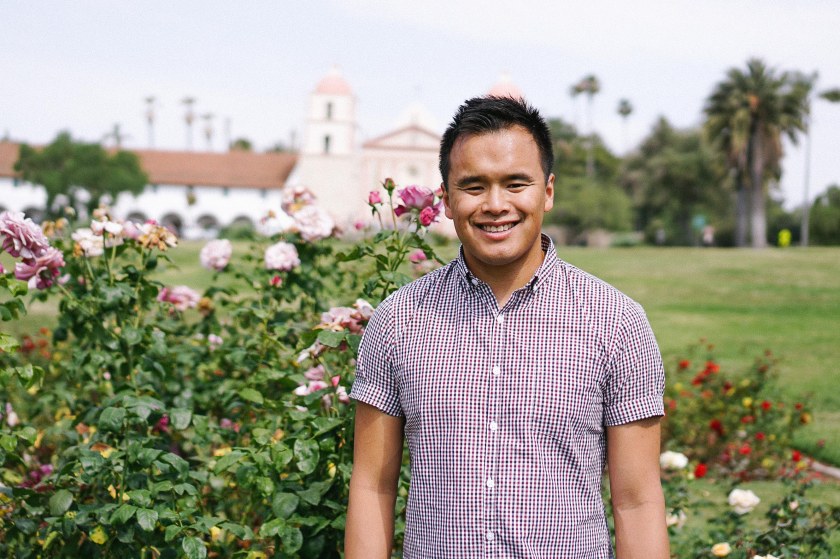 Steven is a 26-year male who is single and ready to mingle (he told us to put that). All jokes aside, Steven is currently a Research & Development (R&D) Engineer for a lithium-ion battery company. He works with electric vehicles, helping to shift our needs away from fossil fuel dependence. When he isn’t smooth talking the ladies, he enjoys hiking, camping, playing basketball, and playing board games.

What does ‘sustainability’ mean to you?
Sustainability is being conscious of my impact and living in a way to offset it. As an R&D Engineer, I’m focused on resource management. My company finds ways to move from fossil fuels and shift towards renewable energy. Knowing how limited our resources are has allowed me to reflect on my impact because once our resources are gone, the effects will not be reversible.

How do you personally incorporate sustainability into your life?
I don’t read papers or forums about sustainability, but I do try to be conscious of my surroundings and our resources. Water is limited in California so I’m very conscious about water conservation. I don’t take long showers at home. At restaurants, I don’t ask for more water than I need. In other ways, I’ll recycle at home or I’ll compost when there are bins available.

What do you think is misleading about sustainability?
Well, sustainability has varying degrees. It is important to realize that a lot of the things we do now may not be considered “sustainable” five to ten years from now. As technology and research continue to make groundbreaking advances, people as a whole have to adopt new practices. For example, five years ago, San Jose passed a law in support of reusable bags by charging people for plastic bags –– and eventually, the entire state of California followed suit. Someday, the same practice may take place where restaurants may charge additional fees for people who want disposable cups in support of reusable cups. From a technological standpoint, solar panel efficiency is growing at an exponential rate. Ten years from now, the current state of the art solar panels may be deemed “inefficient” and considered less sustainable.

“By not doing something, we are contributing to the problem … Issues can only move forward because everyone is combating it together.”

When did you realize the importance of sustainability?
I am heavily influenced by my surroundings and my peers. In high school, I was introduced to reusable bags when San Jose implemented a fee for plastic ones. San Jose also has a “request water rule” at restaurants where you’ll only receive water if you ask for it. I became more involved in sustainable practices when I entered college and joined Sustainable UCR, an organization focused on the environment and sustainability. The organization made me more open-minded because I was surrounded by those who cared about and practiced sustainability. The more I talked about the issues, the more I was able to reflect upon those actions for myself. I also had friends in college who composted and recycled. When I see them apply mindfulness into their everyday lives, I realized that it didn’t take as much effort or time as I thought it would. It helped me understand that small actions go a long way.

You love being in the outdoors. How has that affected your views on the environment and sustainability?
When I’m hiking, I notice there is a lot of trash on the ground. I try to pick up as much as I can and throw them away later. It’s a small action, but it has made me more conscious of the environment. If everyone put in the effort to throw away their trash, it would help a lot to keep the space clean. I have a friend who just came back from Japan and he mentioned how clean the streets were. That may be because people are more self-aware there than here [America]. We have this sense of entitlement and think that it’s not our responsibility. People have this notion, “Someone gets paid to pick up this trash. Why should I do it?” It’s a little frustrating, because, why can’t we all just throw our trash away?

The government has an important role in implementing “green” laws, for example, the banning of plastic bags in San Jose. What are your views on the government’s impact on the environment?
Politics has a huge influence on how people feel about the environment. If we’re talking about climate change, a large percentage of scientists in America believe that climate change is real. Still, there is a small percentage of scientists that deny climate change and are probably being paid off by big oil companies to misinterpret or present wrong data. Money in oil is big and I think there’s a lot of dirty politics that prevent people from being more sustainable. For example, some companies push Tesla away because there are big automobile companies that have an upper hand in the market.

“It’s not an us against them. Really it’s all us together against the problem … What you do today, will determine the future.”

In your opinion, if the government plays a big role in changes, what would you say to someone who thinks they can’t make a difference on their own?
Yes, the government does have a huge influence, but that’s not to discourage the small changes we do in our everyday lives. Changing policies is a macroscopic point of view, while understanding and changing your own impact is a microscopic point of view. If we did our own research and educate ourselves, we can be more influential on our own rather than wait for policies to change. By not doing something, we are contributing to the problem and not helping with environmental issues. Issues can only move forward because everyone is combating it together. So yes, your efforts do matter.

What has been the most challenging part of living a sustainable lifestyle?
Definitely putting in a more conscious effort. I do all the “easy” things like turn off the lights, conserve water, recycle, bring my own reusable bags when shopping, and reuse old boxes. I don’t do more than the “norm,” which I feel is the same with most people. Like, I don’t compost even though I know I should. I think it’s hard to break people’s habits when it becomes “inconvenient” for them. But it’s doable to our change habits –– you just have to try.

Read more about our Zero Hour Story: What’s It All About series.

*This interview was modified for the purpose of the series.