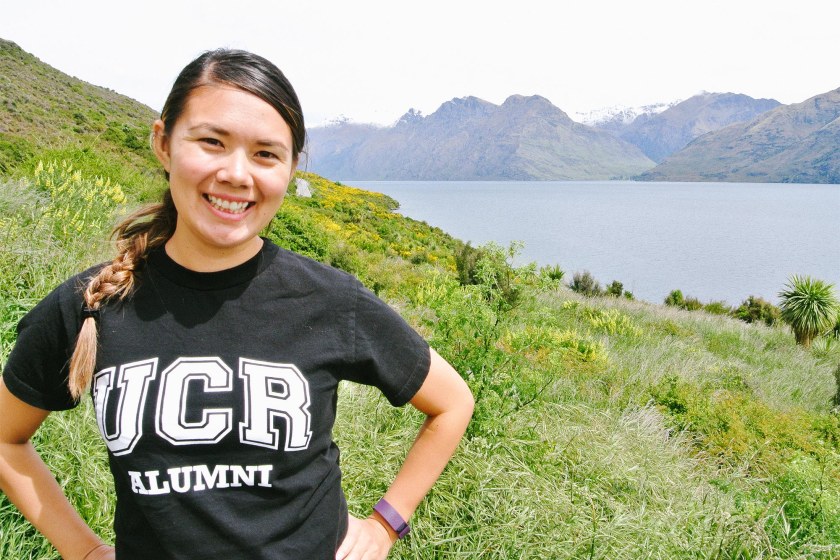 Born and raised in the San Francisco Bay Area, Cindy was surrounded by the outdoors. In college, she immersed herself in several environment-focused opportunities; volunteering with the local Waterkeeper, acting as Program Coordinator for Sustainable UCR, teaching science courses to elementary and special needs students, and most notably, co-founding the Campus Compost Initiative which introduced the three bin system in her university dining halls. Today, she helps companies secure environmental permits to operate their solid waste and recycling operations, and ensure their ongoing compliance with stringent water quality regulations.

What does ‘sustainability’ mean to you?
I prefer sustainability not used as an adjective to describe a thing, product, activity, or a brand. Once you start labeling the word as a descriptor, it diminishes value and limits meaning. Sustainability is a type of lifestyle –– it can be incorporated in every aspect of your life.

What initially sparked your interest in the environment?
Being outside with my family helped nurture my awareness and my AP Environmental Science class [in high school] moved me to pursue it as a career. In the class, one of our experiments involved four 2-L soda bottles that were separated into four different ecosystems –– aquatic, terrestrial, decomposition, and predator/prey zones. We were responsible for monitoring the zones to see who could keep it in balance and alive. It was amazing to see how the different components worked so effortlessly together! It blew my mind to think I created this little ecosystem inside these four 2-L soda bottles.

How did your AP Environmental Science class influence your career path?
[In the class] we learned that certain ecosystems and biomes could only be found in certain parts of the world. I wanted to see them and I wanted to make sure others could too, but we can’t see them if they’re not protected. I initially applied to college as a Biomedical Engineer and after the class, quickly changed it to Environmental Sciences. I thought, “Nope, forget the human body. I’m more interested in the components of the Earth and how they work together.”

“I think one of the most impactful ways to be sustainable is to simply stop buying ‘stuff’ and repurpose things you already own. When I hiked Mt. Whitney last August, instead of buying an entirely new backpack, I decided to repurpose one of my old daypacks.”

Can you talk about a way you incorporate sustainability into your life?
One of the things I do is grow my own plants and herbs. I live in a tiny apartment complex in Los Angeles with a small parking lot in the back. My fiance and I negotiated with our landlord to let us build a raised-bed garden in the lot. While it’s not always successful –– from six squash plants, I only got one. Ha! But my parsley and tomatoes are doing well! –– with time, anyone can do it. It’s hard, but you can start off with one planted pot. With homegrown plants, I don’t have to support large chain supermarkets that import food from far away and who knows how fair the labor and trade really is?

That’s awesome! Are there habits you have that you think others can incorporate in their own lives?
I bring my own lunch to work. I’m saving money and eliminating waste that is associated with eating at a restaurant or eating take-out, like utensils, napkins, and containers. But bringing lunch every day can be sad, so I will still eat out sometimes. When I do, I’ll keep the containers and reuse them for something else; hold my lunch a couple more times or store my fruits and veggies in them.

What’s one advice you’d give to someone who is just starting to learn about sustainability?
I think one of the most impactful ways to be sustainable is to simply stop buying ‘stuff’ and repurpose things you already own. When I hiked Mt. Whitney last August, I needed a daypack with a better frame for support. Instead of buying an entirely new backpack like the guy at REI and several hiking websites that told me I needed to do, I decided to repurpose one of my old daypacks. My fiance and I went to Home Depot and bought a $4 metal window frame and $4 connectors. We cut it into a square and stuffed the frame inside the back of my crummy one-pouch daypack to create a support for my back. Then I took a hip strap from another backpack I already owned and velcroed that to the outside of the daypack. It worked perfectly on the hike. I saved money and reduced waste by not purchasing a new backpack. Plus, I really did not want to carry any more weight on what turned out to be a 16-hour day hike!

“If you want to help the environment, you have to aim for the idea that your actions will make other people act too.”

What keeps you motivated to keep fighting for the environment?
It’s the same reason why I’m working in the environmental field –– if I’m not advocating for something I believe in, then who will? How can I expect anyone else to do it if I don’t do it? If I can show just how easy it is to be a little bit more sustainable or inspire someone else with my choices [living my lifestyle], hopefully, it can inspire another person and it becomes a chain reaction.

What would you tell someone who doesn’t care to make a conscious effort?
If they won’t do it for themselves or their belief in environmental protection, then do it for someone that it does matter to –– your close friends, family, or strangers. Even if you or your friends don’t plan on having children, other people’s children deserve to experience the world the same way we do … maybe with fewer fires and hurricanes, but you know what I mean.

What can you tell someone who believes they can’t make a difference?
Tell that to Rosa Parks or Martin Luther King Jr. Tell that to all these advocates that fought for something they believed in. Granted they fought for different issues, but these are prime examples where one person made a difference. We’re advocating for the environment. If we want to put this in real life situations, think about the ban on plastic bags. That was a collective effort that took years of individuals coming together. People started bringing reusable bags to stores and educating themselves on waste. We came together and were able to change legislation. If you want to help the environment, you have to aim for the idea that your actions will make other people act too. It will create a chain reaction, then soon enough you have a group of people willing to organize and fight for something. If you don’t think you can make a difference on your own, go join a group! There are plenty that need YOU!

Any last words?
Below are some groups that are always in need of volunteers, especially at beach and river cleanups which are held throughout the year:

Read more about our Zero Hour Story: What’s It All About series.

*This interview was modified for the purpose of the series.